skip to main | skip to sidebar

Journalists Can use Social Networking

Session presenters Andy Carvin and Patrick Cooper from NPR and USA Today respectively gave examples of ways reporters can use sites such as Facebook and Twitter to create good journalism. Journalists can use tools via the Internet to increase audience interest and participation in their stories.

The session was designed to give journalists some ideas on how to incorporate social networking tools in their stories. Andy Carvin, a journalists at NPR News, started by saying that reporters should not be afraid of Internet tools because crowd sourcing and citizen journalism is not a new concept. He told a story about Benjamin Harris the editor of the very first independent newspaper, Public Occurrences both Foreign and Domestic, would only print on three of his four pages. The last page was for people to fill in any news they thought was important. "This man at the same time created both crowd sourcing and citizen journalism" Carvin said.

Mediator, Cory Haik, of the Seattle Times, said that editors have to remember that there is an audience out there that is ready to engage if only given the opportunity.

USA Today's, Patrick Cooper, said that journalists were responsible for training the Internet spaces to do what worked for them. Often writers and editors are mediators in the Internet communications between news entities and the audience and they are able to mold the spaces and make sure that participants remain ethical. "We had our guidelines of ethics; they worked in print and during our online transition so we knew they would work again" Cooper said.

Cooper added that USA Today knew they had to add this new social network aspect because that kind of innovation was what USA Today was known for; "there was no one way to do it. We figured out what worked and what didn't."

Haik had some advice for those that were wary of social networking, "the only right way to use it is the way it works for you."

Carvin added, "All of this participation only happens because people love NPR and they cared about the news we created."

Through an interactive video showing his project with students at Walt Whitman High School in Bethesda, MD., Miller showed how there is a lack of education amongst the general population pertaining to what news is.

Howard Schneider says that SUNY, he was teaching smart kids. Students who knew everything about science, history, math, English, but who were not as educated as they should be on news. "I began by teaching values and ethics of the press," said Schneider. "These kids were brilliant, but they believed everything they saw or heard on the news," he said.

Schneider says that students began to question what journalism was and if people like Michael Moore could be considered a journalist. It was at this time Schneider says he saw a need to educate news consumers, not solely journalism students. From this, Schneider created a general elective course for any student at the University that could be used for graduation on News Literacy. The course was a three credit class and was highly recommended for all students.

Schneider began the course by imposing a news blackout telling his students not to read or watch any news for 48 hours. "They don't think they look at news often, but after the day they were worried because they didn't know what was going on," said Schneider.

Schneider's main objective was to teach the importance of news in everyone's lives and the difference between news and opinion. The second part of the course was deconstructing the news; watching the news and pulling apart stories and putting them back so that students can distinguish between assertion and verifiable information.

Schneider wants to make the course online, in high school and community colleges. He envisions getting out of work journalist to come to Stony Brook to learn to facilitate a news literacy course so that they can go and facilitate similar courses across the country.

For more information on the News Literacy Project visit, www.thenewsliteracyproject.org

Posted by Team Howard at 2:03 PM 0 comments Links to this post

Collaboration between non-profit news networks and traditional newspapers has had a shaky history in the news industry. At "The New Watchdogs: Investigative Collaborations" panel, representatives from investigative news organizations discussed the benefits of partnership.

According to Mulvihill, partnerships with these organizations help to offset the decrease in content due to newsroom downsizing while increasing in depth reporting pieces.

Here are some of the highlights from the discussion. 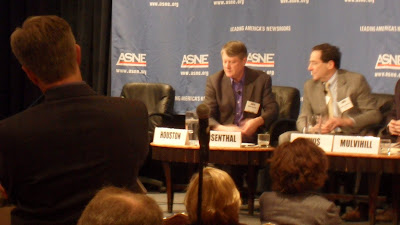 "You're not going to survive unless you're deep in the community and have the community's support." -Brant Houston, Knight Chair, University of Illinois at Urbana-Champaign 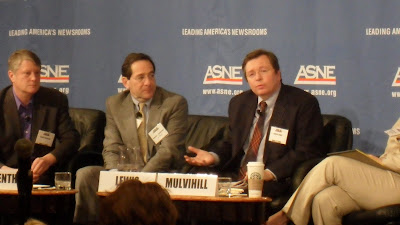 "I'm not a business person, but I know I need somebody who can come in and see the opportunities… [including] social networking skills." -Robert J. Rosenthal, Executive Director, Center for Investigative Reporting

by Seth A. Lemon and Nikole L. Pegues
Posted by Team Howard at 10:57 AM 0 comments Links to this post

"We measure our success in impact," said Andrew Donohue.

Donohue is the editor of the Voice of San Diego. He spoke on how his company looks at the services it provides to San Diego in order to create more than a news organization. It is important to him that the reporters use their intellectual capital to teach people through the news the produce.

When responding to a question, Donohue answered that no city can be served by only one daily newspaper. The question led to some stimulating responses and opinions from the panelists, which included Jeff Light, the editor of The San Diego Union-Tribune, Barbara Bry, the associate publisher of the San Diego News Network, and Lorie Hearn, the executive editor of the Watchdog Institute.

"You want your reporters to feel like someone's breathing down their neck because it makes them better," said Hearn.

by Seth A. Lemon
Posted by Team Howard at 10:01 AM 0 comments Links to this post

The 24/7 news cycle time-crunch and money losses makes it difficult to produce well-crafted or in-depth journalism. Niche reporting and media collaborations offer some possible solutions to these problems and, consequently, are beginning to make competition more obsolete, according to a Wednesday ASNE 2010 panel.
"You are going to see more and more partnerships because of the efficiency and effectiveness on both ends," said Editor of The San Diego Union-Tribune Jeff Light.
The panel mentioned a couple of of reasons these partnerships could flourish.
Media partnerships allow for companies to focus on their strengths, making the end-product better and increasing revenue on both sides.
"We do what we're good at, which is reporting, and they do what they're good at, which is production," Voice of San Diego's Andrew Donohue said about his company's partnership with NBC.
But its not just reporting and production skills. Sometimes it's as simple as knowing the issue.
Investigative nonprofit models, for instance, allow for small groups of journalists to focus on in-depth reporting on very specific problems or tips of interest.
Many times daily paper's reporters are assigned to a beat and can cover an investigative piece "if it comes up." However, these nonprofits can spend time picking out prominent issues without worrying about daily product.
Nonprofit media organization are separate from newspapers and can receive outside donations, grants, or even payment for product in order to conduct their research with the depth it deserves.
By working with other news organizations, the audience expands and there can be increased revenue.
It's typical for 8 percent of the adult population, approximately 160,000 people, to view a local newspaper Web site, said Light. To get to 10 percent is difficult.
Just because there are collaborations doesn't mean there won't be any competition. For instance, daily papers or daily news sites can still compete since there's a likelihood they will cover the same news.
But with a down-turn in many newspapers' profits, playing to your strengths and supplementing with specializing news or other multimedia are not out of the question.
"We don't need to be the number two or even number three to be profitable," said Associate Publisher of San Diego News Network Barbara Bry. "There is room for more than one journalistic enterprise to make money."
by Rachel Leven for the University of Maryland
Posted by Team Maryland at 9:06 AM 1 comments Links to this post
Labels: 24-hour news, ASNE10, Competition, Partnerships, Sustainability

The Power of Technology

Mac Notebooks sat atop the tables in the the conference room designated for the Talents and Tools workshop - "This is Serious! Developing Information Toys and News Games".

Attendee's listened intently as they took advantage of the availability of the free wi-fi offered at the ASNE convention . The "information highway" ran parallel to the information given.

Nora Paul, director of the institute for new media studies at the University of Minnesota and Joshua Hatch, interactive director for USA Today led the discussion.

In the 50 minute seminar they touched on: interactive news games, geared towards making news fun;the use of maps to locate homicides and airport reliability, among other things and web tools like dmTools and Dabble.

The crowd non-verbally interacted with both Paul and Hatch during their respective lectures, but more focus was given to Paul's final slide. He demonstrated a unique web device, instituted by USA Today, used to find deceased soldiers by name, age, race, gender and marital status.

Posted by Team Howard at 9:32 PM 0 comments Links to this post

All Fun and Games...

The power of the Internet and online content is undeniable in the world of journalism and the dissemination of information.

Interactive online tools were the topic of this afternoon’s second Talents and Tools workshop titled: "This is Serious! Developing Information Toys and News Games".

The method of storytelling was explored through various online sites, games and other forms of multimedia with the moderation of Nora Paul, Director of the Institute for New Media Studies at the University of Minnesota and Joshua Hatch, interactive Director for USA Today.

Paul showed ASNE members how web tools and online games can do such things as recreate sequence of events which is helpful in readers interested in crime stories for example.

She also showed a visual aid that displayed the degrees of separation between individuals/businesses and a Minnesota former auto mogul accused of fraud.

USA Today offers a plethora of interactive charts and graphs that delve deeper into a story such as their presidential approval rating tracker which displays all presidents rates on the same graph in comparison or stretches out their respective tenures for detailed specific research.

amMaps, another mapping application, was utilized to display swine flu cases and outbreaks around the world.

Regardless of the approaches, Hatch and Paul both assured workshop participants that multimedia was not difficult for a newsroom or individuals to produce. In fact, most journalists have the technological skills to create these online tools.

Not only do these multimedia assets supplement a story, said Paul, but it also allows reporters to stay organized by having all of their researched work accessible and available in an easy medium.

"These tools provide ways to go deeper into a story and allows readers to gain background to what’s going on in the story," said Hatch. "A newspaper is not going to be a satisfying way to gain all my information or answer my questions...online tools help you do that."